DHAKA, March 19, 2019 : The medical team of Bangladesh Cricket Board (BCB) is set to sit with Shakib Al Hasan tomorrow (Wednesday) to discuss about his injury after which his possibility to play the Indian Premier League (IPL) will be determined.

The cash-rich tournament begins on March 23. Shakib will be playing for Sunriser Hyderabad, a team which eyes to lift the coveted trophy after 2016.

According to BCB chief physician Dr. Devashis Chowdhury Shakib didn’t complain anything about the pain and further injury as he has been in a rigorous rehab following the finger injury that ruled him out of the entire New Zealand tour.

Dr. Chowdhury said there will be no fitness Test included in the meeting with Shakib tomorrow since he looks fit.

”We did not plan to have his [Shakib] fitness test,” BCB chief physician Debashish Chowdhury told the today.

”Neither we plan to have any further x-ray unless we feel that way after talking with him,” he said. ”But we will listen how he feels and whether he is having any kind of difficulty or not.”

Shakib had already started bowling and batting in net as part of his plan to return to the cricket as early as possible.

“As far as I know he is practicing in full rhythm and from what we have seen so far that he is doing that without any kind of discomfort,” he said.

”But still we need to know from him whether he is feeling any kind of problem while playing any particular shot and is he totally comfortable while fielding and catching,” he said.

Earlier, Bangladesh Cricket Board (BCB) said that Shakib will need to prove his fitness to get the clearance from the governing body to play the IPL.

“He (Shakib) just returned from an injury and started training He needs to go another assessment after which we can make you clear about his NOC,” BCB CEO Nizamuddin Chowdhury told on Sunday.

The workload of the IPL is also a major concern as the ICC Cricket World Cup is approaching fast, which is the top priority for every board, not only for BCB. Even the Indian players were advised to be careful about their workload in the IPL. 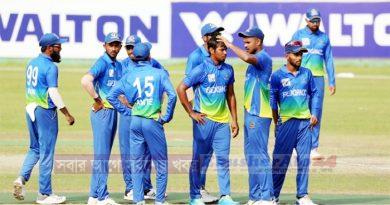