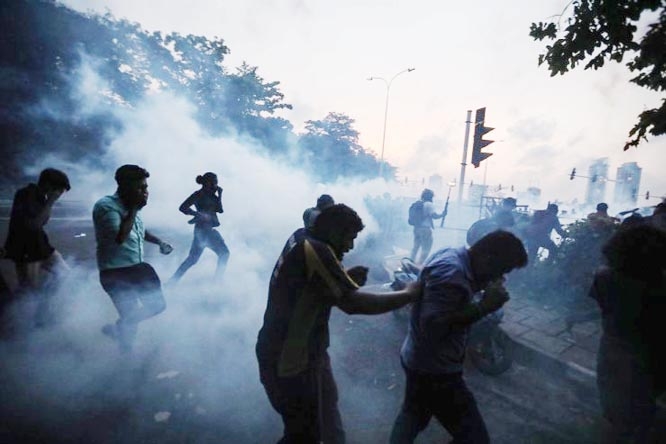 Police again lobbed tear gas and used water cannon to disperse students trying to storm Sri Lanka’s Parliament bhavan on Friday, as the country was brought to a halt by a trade union strike demanding the government’s resignation.
Months of blackouts and acute shortages of food, fuel and pharmaceuticals have caused widespread suffering across the South Asian island nation of 22 million people.
Public anger has sparked sustained protests demanding the government’s resignation over its mismanagement of the crisis, Sri Lanka’s worst since independence in 1948. Thousands of student protesters had been camped on the road leading to the legislature, which is on a man-made island on a lake in the capital Colombo, since Thursday.
Officers fired a barrage of tear gas followed by water cannon from two trucks, but the crowd quickly reassembled behind police barricades set up to block access to the parliament.
It was the second time police tried to disperse the crowd with tear gas, after an earlier unsuccessful attempt on Thursday afternoon. Millions of workers stayed off the job on Friday in a strike organized by the country’s trade union movement, with all but one scheduled train service cancelled.
Privately owned buses were off the roads while industrial workers demonstrated outside their factories and black flags were hung across the country in an expression of anger against the government.
“We can pinpoint the policy blunders of the president that led to this very sorry state of our economy,” said trade union leader Ravi Kumudesh. “He must go.” Private buses, which account for two-thirds of the country’s fleet, were also off the road, Private Bus Operators Association chairman Gemunu Wijeratne said.
“We are not providing services today, but if groups of people want to join the anti-government protests within a radius of 20 kilometres, we will give our buses free of charge,” Wijeratne told reporters in Colombo.
President Gotabaya Rajapaksa has insisted he will not step down despite escalating demonstrations across the island, including a protest that has been camped outside his seafront office for nearly a month. Sri Lanka’s economic crisis took hold after the coronavirus pandemic hammered income from tourism and remittances.
Unable to pay for fuel imports, utilities have imposed daily blackouts to ration electricity, while long lines of people snake around service stations for petrol and kerosene. Hospitals are short of vital medicines and the government has appealed to citizens abroad for donations.
Last month Sri Lanka announced it was defaulting on its $51 billion foreign debt, and finance minister Ali Sabry warned this week that the country will
have to endure its unprecedented economic hardships for at least two more years. 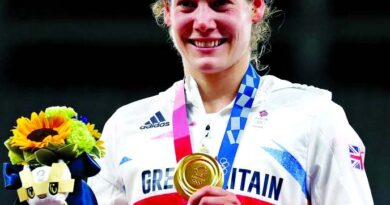