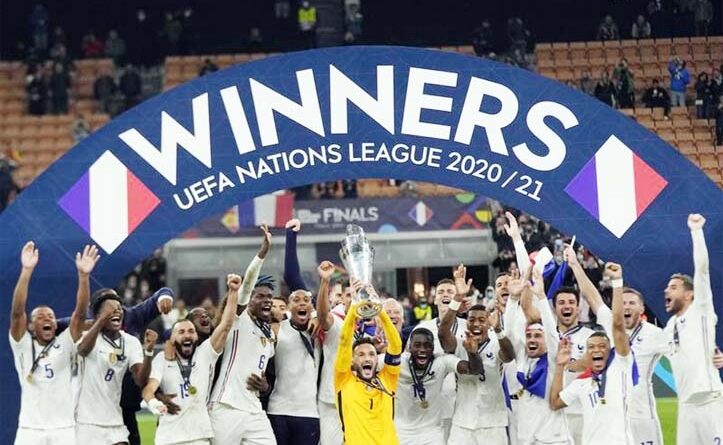 News Desk : World champions France won the Nations League final with goals from Karim Benzema and Kylian Mbappe earning them a 2-1 win over Spain at the San Siro stadium o Sunday.
Didier Deschamps side had struggled to get a foothold in the game during a first half dominated by Spain but after going a goal down, following Mikel Oyarzabal’s strike, they came alive.
With Paul Pogba excellent in midfield, Mbappe’s speed and movement stretching Spain and Benzema a constant threat, the French were good value for their victory.
“We showed our character against a very strong team. We never gave up,” said Benzema.
“It shows what great teams do – never panic, be patient and wait for the right time.”
Luis Enrique’s young Spain side, who had beaten European champions Italy in the semi-finals, had played their trademark possession football with patience and precision but in the end could not compensate for the absence of a genuine striker. “It was a difficult defeat,” said Spain’s France-born defender Aymeric Laporte. “We have proven to be a great team despite our youth, we have shown better football than them, but what counts is the result.”
The first half was a relatively subdued affair with Spain moving the ball well but without dangerous penetration while France were disrupted by the loss to injury of center-half Raphael Varane.
But both sides were awoken after the break when France full-back Theo Hernandez thundered a shot against the underside of the bar after a swift break.