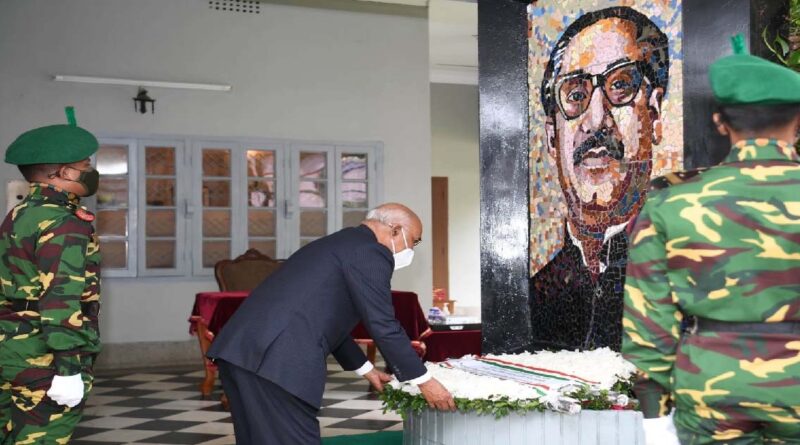 News Desk : Indian President Ram Nath Kovind on Wednesday paid homage to Father of the Nation Bangabandhu Sheikh Mujibur Rahman at Bangabandhu Memorial Museum, the place which bears the testimony to the life and work of Bangabandhu.

He signed the visitors’ book kept there after paying respect to Bangabandhu.

Rehana also presented Kovind with a set of books.

Earlier, President Kovind visited the National Martyrs’ Memorial in Savar and placed wreathes there, paying tributes to the brave hearts of the Liberation War of Bangladesh.

He arrived here on a three-day State visit as a “unique example” of the existing good relations between the two neighbouring countries.

At the invitation of President Abdul Hamid, the Indian President will attend the 50th Victory Day celebrations of Bangladesh, closing ceremony of the birth centenary of the Father of the Nation Bangabandhu Sheikh Mujibur Rahman and 50 years of Bangladesh-India diplomatic relations.

President Kovind is scheduled to present a T-55 tank and a MiG-29 fighter jet used during the Great Liberation War of Bangladesh to the President for preservation and display at the Bangladesh National Museum.

“India is a neighbour of Bangladesh and a true friend. The Bangladesh-India relations are not just about borders. The unwavering support of this friendly country in the great War of Independence of Bangladesh in 1971 laid the foundation of good relations between the two countries,” Dr Momen said.

“It also reaffirms the shared desire of both countries to further consolidate and strengthen the multifaceted and irreversible partnership, based on historical and cultural ties, mutual trust and understanding,” said the Indian Ministry of External Affairs.

On the third day of his visit on Friday, the President of India will inaugurate and inspect the newly renovated section of the “Kali Mondir” at Ramna.

He expressed his interest in exchanging views with the members of the relevant committee of the temple.

The Indian President will leave Dhaka for Delhi on Friday noon.

Earlier, Indian Prime Minister Narendra Modi had paid a State visit to Bangladesh from March 26 to 27, 2021 to join the celebrations of the golden jubilee of the independence of Bangladesh, the birth centenary of the Father of the Nation Bangabandhu Sheikh Mujibur Rahman and 50 years of establishment of diplomatic relations between India and Bangladesh.

Dr Momen said such a high-level visit between Bangladesh and India in 2021 will be mentioned in gold letters as a milestone chapter in the existing relations between the two countries.

DMP chief warns for not appointing drivers on contract basis