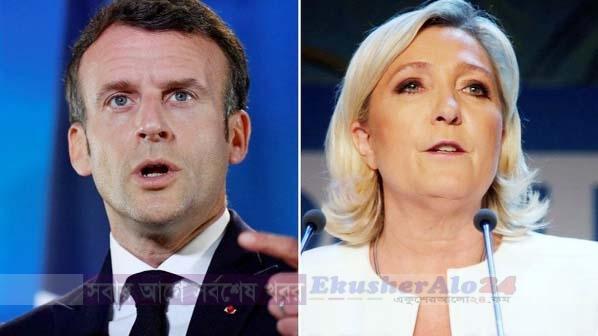 News Desk : Early results indicate both President Emmanuel Macron and his opponent Marine Le Pen will fail to make the gains they were hoping for in the first round of regional elections in France.
Mr Macron’s centrist party is projected to gain more than 10% of the vote – just enough to take part in the second round next weekend.
Ms Le Pen’s far-right National Rally has also fallen short of expectations.
Both are trailing the conservative party, Les Républicains.
One of Mr Macron’s MPs, Aurore Bergé, described her party’s poor performance as a “democratic slap in the face for all of us”.
Ms Le Pen’s National Rally party was expected to top Sunday’s first round of polling, and win at least one region for the first time. Instead it is now predicted to come second.
Ms Le Pen is not running as a candidate but she has been leading the campaign.
She described the record-low voter turnout – a projected 66% abstention – as a “civic disaster”.
She blamed the results on the government’s inability to inspire faith in political institutions. “Let’s face it, the results were marked by a torrential and also historic abstention of nearly 70% due to the mistrust of an electoral system, which leaves voters with the feeling that nothing can change, that everything has been confiscated,” she said.
Voters are choosing new councils for France’s 12 mainland regions, the island of Corsica, plus four overseas, as well as 96 departments. There are more than 15,700 candidates standing for 4,100 seats.
This election is being watched particularly closely, because the next presidential elections are less than a year away. It is being used to get a taste of voters’ mood.
An Ipsos exit poll shows the conservative Les Républicains winning 27% of the vote, followed by National Rally with 19%. The Greens, the Socialist Party and Mr Macron’s La République En Marche (LREM) are all on 11%.
This is the first time President Macron’s party has taken part in regional elections – La République en Marche did not exist the last time they were held in 2015.
His party was not expected to do particularly well in this election. Last month a minister told AFP news agency: “These elections are never good for the party in power. You always get it in the neck.”
Yet LREM has still fared worse than expected. It will not win any region outright, a sign the party has failed to build support at local level.
The regional election was delayed for three months because of the pandemic. There will be a second-round run-off on 27 June.
The editorialists are having a problem this morning deciding what was the story of the night. Was it disappointment for Marine? Was it Macron’s failure? Was it centre-right poised for presidential challenge? Was it Socialists and Greens show left-wing vote still strong?
Or was it: crisis in French democracy. Only one in three bother to vote.
All of the above are plausible headlines. Emmanuel Macron and Marine Le Pen have little to smile about, while Les Républicains (the old Gaullists) see in the successes of Xavier Bertrand in the north and Valérie Pécresse in the Paris region signs that one or other will be a serious presidential challenger. The left can say (once again): if only we could unite we might actually count for something.
Truth be told, though, the astronomic level of abstention means you can argue everything and its opposite about the vote. Because to every apparent lesson comes the rejoinder: yes, but what about the views of the majority? The ones who didn’t turn out.