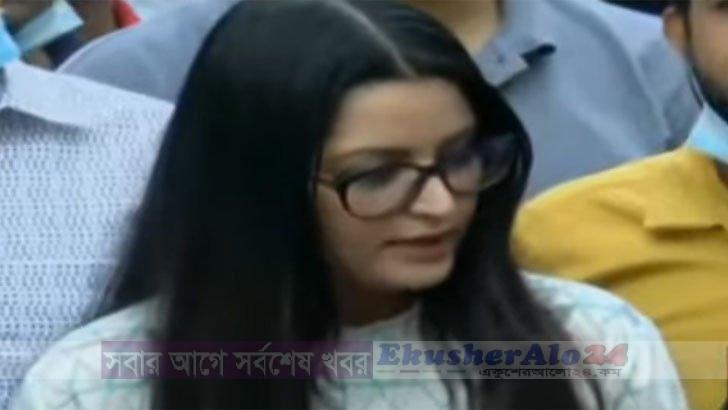 Detectives on Tuesday interrogated actress Pori Moni in connection of the rape and murder attempt case she filed against two businessmen and four others with Savar police station.
The actress stayed at the Minto Road office of Detective Branch for over two hours in the afternoon and then left for her home.
After the interrogation, she talked with reporters on the DB office premises and expressed her satisfaction over the arrest of the accused and progress in the investigation.
When reporters asked her whether she went to drink liquor at the Boat Club, the actress Pori Moni said, “Is it possible? ‘I went to drink or snatch, is it ever possible? Do you think so? Only I knew how upset I was. Everyone supported me. I am overwhelmed by everyone’s love. I can live now.”
Pori Moni went to the DB office in the capital at around 3.30 pm and came out from there around 6 pm.
“I was not called by the DB police, I came here on my own,” she said. I have to go back to work.”
Expressing satisfaction over police action in her case, she said, “I saw that the accused had been arrested. I believe I will get justice.”
Regarding non-cooperation from the IGP’s, she said, “There is so much talk because I could not reach the IGP. He was my only hope. As soon as my message reached his ears, he took immediate action. ‘
Asked if she was drunk that night, Pori said, “I was forced to drink alcohol. I don’t know what else I was fed with alcohol in that situation. At that time I did not understand anything. I was dying. I went to the police station to report the condition . I informed the police and told them to take me to the hospital. I have never spoken out against law enforcement. They helped me a lot. ‘
The actress earlier complained about the police’s non-cooperation, but on Tuesday, she said that she was satisfied with police initiatives.
Before getting arrested on Monday at his Uttara apartment, prime accused in the case businessmen Nasir U Mahmood denied the allegations and complained that ‘Pori Moni went to the Dhaka Boat Club on Thursday night to get foreign liquor bottles for free. The club authorities refused her and she then filed a fake attempted rape case.’
Pori Moni rejected the allegation and said that she was forced to drink liquor by Nasir, Tuhin Siddique Omi and some others at the club.
At that time, DB Joint Commissioner Mohammad Harun Ar Rashid told reporters, “No matter how influential the accused are, no one will be spared. I will take proper care and finish the investigation of the case. ‘
He has been assured that he will get a fair trial in the case.
He said Pori Moni came to the DB office to express her gratitude to the police. DB officials spoke to her to find out the details of the incident and the case.
DB joint commissioner Harun-or-Rashid said they were yet to identify four other unnamed accused in the case.
Earlier, Pori Moni alleged that five people tried to rape and kill her at Uttara Boat Club on Thursday night.